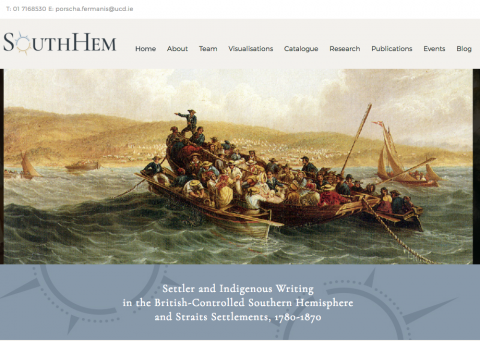 On 29th November, 2017, at the Cultural Geographies of the Colonial Southern Hemisphere Conference, the Department of English, Drama and Film at University College Dublin launched SouthHem, a dynamic exploration of reading, literature and cultures in the Southern hemisphere.

SouthHem is a five-year (2016-2021) comparative study of the literary outputs and mediating institutions produced by British settlers, indigenous populations, and mixed-race peoples in the British-controlled Southern Hemisphere and Straits Settlements from 1780-1870. The project focuses on three transnational zones: ‘Zone 1’ (Oceania): Australia and New Zealand; ‘Zone 2’ (Southern Africa): Cape Colony and Natal; and ‘Zone 3’ (Straits Settlements): Singapore, Penang, and Malacca. The literatures considered in this context include writing in English, translations into English, transcriptions, and writing in languages of origin.  The website brings this research together and innovatively provides a catalogue of the books held in libraries and private collections in these settlements.

Working with Porscha Fermanis and her team, I helped to bring this wonderful project online.  Explore SouthHem at www.ucd.ie/southhem